Kharkov city is so rigorous, that all the bans and crises are the child’s play to it. “Kreschatik” is closed, “Imperial” is closed, everything is closed – except for the clubs in Kharkov. The last bastion of poker in Ukraine is not going to yield and, what is more, is going to arrange the biggest event on its land!

This is completely surprising and also somewhat absurd new. “How is this even possible?!” – many people will ask. “We don’t know”, – we’ll answer.

But it’s not really important. The main thing is that poker in Ukraine is alive and it fights back. It’s like a parade on the Red square right in face of the fascist threat. A message of some sort: we’re here and we’re not running away, we’re unstoppable!

The series will take place in clubs Full House, Flash and Full Team, the first two will operate more often.

The WSF Poker Tour schedule, which has been valid on the Ukrainian territory for a few years already, is standard. Among the primary tournaments there are:

There’s also a pleasant surprise: a separate Gin Rummy event with 550 grivnas buy in, you don’t see it much these days. 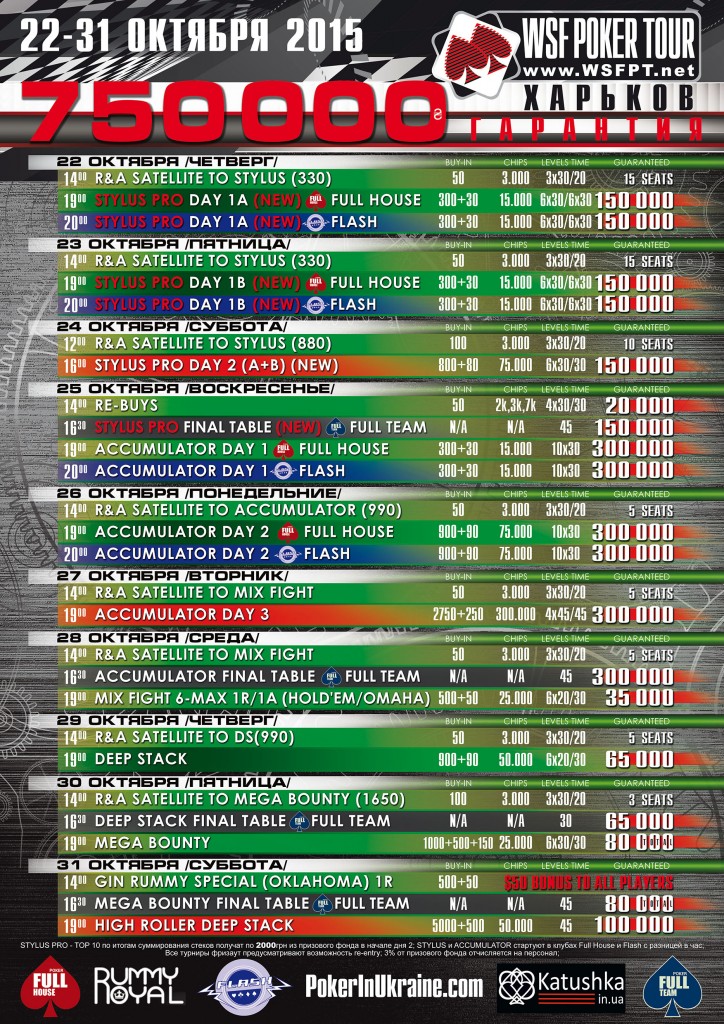 Kharkov poker has never been displaced

While the organizers of the most underground gaming flats took a vacation, the poker in Kharkov has never stopped to work. Some clubs hadn’t even closed. Well, maybe for a couple of weeks last year.

The organizers often hear the question “How does WSF Poker Tour manage to get round the Ukrainian government”. And they answer: “As always, since 2009… It is a sport.” Nevertheless, this year the series arranged some events in Europe, abroad the motherland. For example, at the beginning of September WSF Poker Tour took place in Vienna, and in May it was in Prague.

The demand for poker in Ukraine is as huge as it never was, because almost everything is closed. On the other hand – it would be a reckless idea to hope for a new stream of players from Russia and other countries. One can cross the border quickly, but it’s not that simple. Most likely you will need a special initiation and an international passport.

Though, as the organizers themselves said, they can help to entry the country. They will meet you with bed and breakfast.

We’ll continue following the course of events. If the Fortune smiles, Kharkov will become a new Kiev!