Venetian cut the poker room space in half… for blackjack 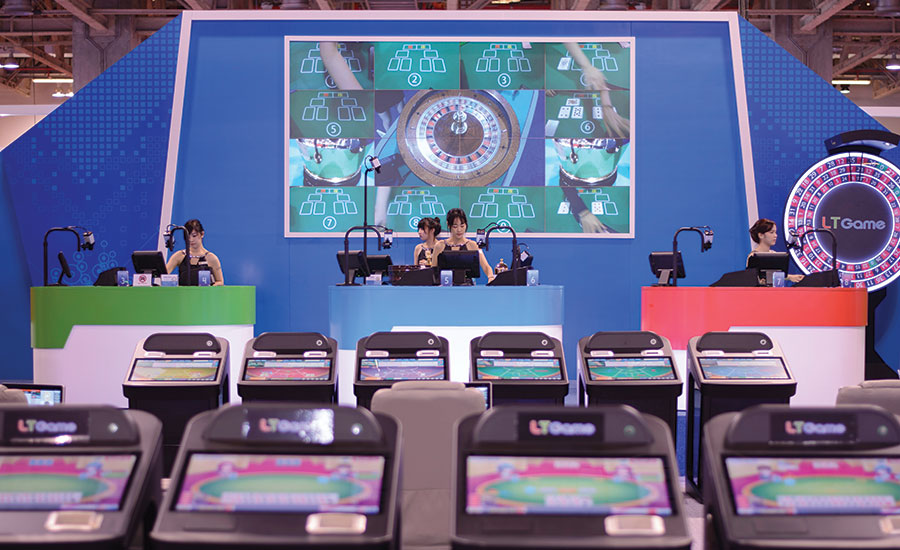 Las Vegas, next to Macao, Singapore and other Asian countries starts the technical revolution. Huge areas (in terms of Western countries) are given to the building of the “stadium-type” complexes: tens or even hundreds of people are able to simultaneously play blackjack or baccarat against live dealers.

It all started in 2012 when big casinos of Macau started to try to find a solution to the problem of limited gaming space and a limit for a number of tables.

The found solution was an elegant one. Fast Action Baccarat (FAB) tables! Up to 60 people could play baccarat in Venetian Macao, simultaneously, also a tricky system of trade of chips between the dealer and the player was invented – because of that all the complex was considered a one playing table!

Such complexes were invented in China by the company LT Gaming. Modern analogues are completely electronic which significantly speeds the gaming process up and is able to provide the gaming process for up to several hundreds of people.

Not only several dealers can provide action for tens of players at a time, there are up to four hands at each person’s screen. For instance, Imperial Baccarat in Palazzo allows that (the casino is situated right next to Venetian Casino in Las Vegas).

Why is poker space being cut?

We are totally agree with this baccarat on stadiums, but the best poker rooms of Las Vegas suffer! Players expressed the worries at 2+2 forums:

“I went to play Sunday $200 (in Venetian), half of the hall is covered with blankets. They say, the new blackjack area will be separated by the wall, so the poker area is cut in half. I wonder what’s going to happen with the following DeepStack Extravaganza series,” – posts one of the forum users.

Other regulars joined the discussion. Someone said that poker room is going to be placed at some other floor and started to talk about job cuts, the others remembered overfluxing of poker market in Las Vegas.

“Last time I turned to this question, there were too many poker tables in Vegas. I think, the market will suffer a decrease with second-class rooms having to close up”.

Venetian has huge areas. More tables may be put even in the remaining half of the poker hall.

We won’t argue that poker organization has always been problematic for any gambling facility. It is way easier to set up profitable blackjack or roulette table.

According to unconfirmed data, Macau has about 4,000-5,000 gaming places of various kinds of stadium complexes. And this number is only going to grow bigger. Especially considering the growth in income (hands happen faster and there are more of them) and proficiency in terms of taxpaying.

The situation is quite strange in Macao. Highrollers are still interested in visiting casinos where all the conditions are made for them. A middle-class man shouldn’t find anything special for him in Macao. Especially if he has already been there and got the experience. He should try something else, like Singapore or Philippines.

Electronic blackjack with live dealer does seem like a good solution to this problem. New generation is used to interact with the screen, click on something and use the electronic currency.

The bets in stadium complexes aren’t that big – starting from $5.It is all done to attract local average Chinese (in Macau) and Americans (in the USA).

By the way, electronic stadiums appear not only in Vegas. For instance, in Pennsylvania in Sands Bethlehem casino there is a very big complex for 150 people.

Future is already in the present

All these huge devices look like futuristic casinos, don’t they? Hundreds of people in front of the screens, they don’t have chips, nor cards, everything is made automatically. There are huge screens in the halls, the hands are quick.

It is easy to finish the game – just press the button, get the cheque and see you later! As simple as that.

Gambling industry adjusts to the modern tendencies, tries to survive and attract people who are chasing Pokémons on the streets,

And that is not an easy task…