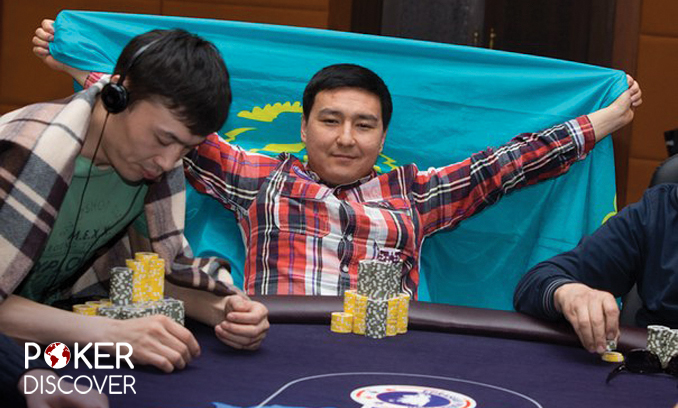 In Kazakhstan there are special gambling zones as well as in Russia. On the rest of the territory gambling is prohibited, and poker is not an exception. However, it does not exclude an opportunity to host here some of the biggest poker series.

In the spring of 2007 a law "About gambling industry" came into force and it put an end to the career of the majority of Kazakhstan "gambling" entrepreneurs. All the casinos have been "transferred" to the two resort areas - Schuchinsky district of Akmola province (northern) and Kapshagay in Almaty region (southern). In 2008 the first casino was opened in Kapchagay. Unlike Russian gambling zones, Kazakhstan allotted areas are located not far from the major cities: the distance from Astana to Shchuchinsk is about 250 km, and from Kapchagay to Almaty - 70 km. Both of the gambling zones are located in picturesque places with decent infrastructure. At the time of this writing a dozen legal casinos operate in Kazakhstan.

State of poker in Kazakhstan

State of affairs regarding poker in Kazakhstan is uncertain: the game is not on the list of sports but at the same time it is not prohibited directly. As well as in Russia and the Ukraine law enforcement authorities in Kazakhstan often confuse poker with roulette. Fair enough. Annually dozens of arcades, illegal casinos, bingo clubs and other questionable establishments are closed through the country. Good poker clubs are also shut down in the heat of this moment. Illegal gambling establishments function in Almaty, Astana, Shymkent, Karaganda, Aktobe and other big cities.

Where to play poker in Kazakhstan?

The main underground poker activities take pace in Alma-Ata, the only millionaire city, and Astana, the capital of Kazakhstan.

As for the gambling zones, "Borovoe" resort (Burabay (Shchuchin) district) is an example. One of the largest casinos in Central Asia «Cash Ville Casino» is located there. It has already twice hosted the Eurasian Poker Tour (EAPT) together with the official Kazakhstan Poker Championship. The last stage was finished in March 2014, with the total guarantee of $ 1,000,000 (too much for the Russian or Ukrainian poker tours). Buy-in of the Main Event - $ 2,000 guarantee - $ 350,000.

Among other well-known legal institutions are casino "Riviera" (Kapshagay), "Flamingo" (Kapshagay) and the others.

Poker fans should first go to "Borovoe" – «Cash Ville Casino» with their poker club in Kazakhstan has no analogues in the world yet. In Kapchagay the construction of a large casino close to the level of «Cash Ville» will be soon completed.

Kazakhstan casinos basically meet all the international standards. Furthermore, to open a casino one requires huge investments, not to mention high taxes. Target audience of the most famous casinos - wealthy middle-aged citizens with a deficit of adrenaline. Safety in some places remains questionable. A couple of years ago dealers working in the Burabay area complained about the excesses of players: girls are "groped ", croupiers are roughed up. Such incidents are peculiar to less popular casinos.

Who plays poker in Kazakhstan?

Since gambling zones are located away from the major cities, players have to take a taxi (which costs a lot of money), or to go by your own transport. To go there just for a couple of hours has no sense and it’s unprofitable. Only the entrance to many casinos costs a few hundred dollars (normally $500). The players are given chips for this amount, which you are to put into circulation.

Only these expenses show that the Kazakh players are divided into two categories: the regulars of all profiles (strong, weak , near-zero) and well-off citizens (men over 35-40) .

During the Eurasian Poker Tour (EAPT) Russian and Ukrainian regulars noted the low level of Kazakhstani players - both in tournaments and in cache. In general, the playing field in Kazakhstan poker clubs should be weaker than in Russia, Belarus and the Ukraine.

There are many tournaments. Buy-ins are very different - from tens of dollars to hundreds. Underground cash games have higher stakes reaching $50-100 and even more. It’s impossible to take part in such games without knowing the definite people. Regular players get SMS-messages with news, schedules and other information.